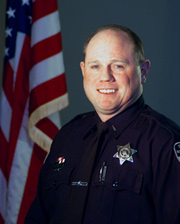 On September 20, 1997, at approximately 1:20 a.m., Boise Police Officer Bryan Hagler and his partner, Officer Stephen Van Doren, initiated a traffic stop in the parking lot of the Rider’s Bar in downtown Boise. The two men in the automobile, brothers Craig and Doug Brodrick, displayed belligerent and aggressive behavior as they repeatedly defied Officer Hagler’s commands. Officer Hagler remained polite and controlled. With Officers Dale Rogers, Ron Winegar, Gary Wiggins, Mark Stall, and Rob Berrier present, Craig Brodrick was commanded three times to raise his jacket and turn around. Each time, he responded, “I don’t think so!” Sweeping his jacket back, he drew a gun from a holster on his hip and began shooting at the officers, hitting Officer Winegar. A gun battle ensued. Doug Brodrick emerged from the passenger door of the automobile and opened fire, fatally wounding Officer Stall. Officer Hagler refused to retreat under heavy fire, even though he had suffered a serious gunshot wound during a traffic stop five months earlier. Knowing Officer Winegar had been shot, Officer Hagler left cover to approach him in order to provide protection and support. He played a vital role in returning fire and helping to end the threat to his fellow officers. Officer Hagler’s indomitable courage in the face of extreme danger and his profound concern for his fellow officers, without regard for his own life, above and beyond the call of duty, are in the highest traditions of the Boise Police Department and of Idaho law enforcement and reflect great credit upon himself, the Boise Police Department, and all Idaho law enforcement officers.