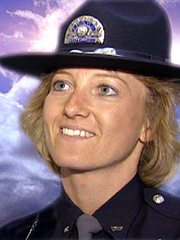 Shortly after 2300 hours on June 17, 1998, Idaho State Police Trooper Linda Huff arrived at Idaho State Police District I Headquarters in Coeur d’Alene. After completing some paperwork, she exited the building and encountered Scott Yager, who had come to State Police Headquarters for the purpose of murdering a police officer. After Yager fired his weapon at Trooper Huff, a gun battle ensued in which Trooper Huff was wounded numerous times in her lower body. Despite her wounds, Trooper Huff drew her pistol and returned fire, emptying her magazine and wounding Yager. Yager then shot Trooper Huff a final time, killing her. Through indomitable courage, complete disregard for her own safety, and profound concern for her fellow officers and State Police employees, Linda Huff averted a probable loss of life and injury to others in the District I office. Officer Huff’s extraordinary heroism and intrepidity at the cost of her own life, above and beyond the call of duty, are in the highest traditions of the Idaho State Police and of Idaho law enforcement officers and reflect great credit upon herself, the Idaho State Police, and Idaho law enforcement officers.