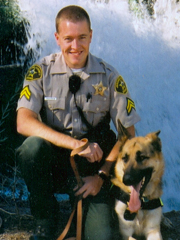 On January 3, 2001, in Eden, Idaho, Jerome County Sheriff Jim Weaver and members of his department, including Undersheriff Jocelyne Nunnally, Corporal Jim Moulson, and Corporal Phil Anderson, sought to serve a search warrant on the home of George Timothy Williams, a suspected drug dealer. The officers took positions outside Williams’ home, preparing to serve the warrant. Corporal Moulson knocked on the door and announced the service of the warrant. When no response came, Corporal Moulson rammed the door. Corporal Anderson entered first, encountering the suspect, Williams, who was pointing a .44 caliber handgun at him. Anderson immediately shot Williams, but Williams also fired, killing Corporal Anderson. Corporal Moulson engaged Williams at close quarters, shooting him several times. Williams also continued to fire and shot and killed Corporal Moulson. Williams emerged from the house and aimed his gun directly at Sheriff Weaver. Undersheriff Nunnally stepped between Williams and the Sheriff and fired at Williams, causing him to dive for cover. The actions of Corporal Anderson, Corporal Moulson, and Undersheriff Nunnally reflect great heroism and sacrifice. The suspect was killed during the gun battle, and it was later determined that it was Corporal Anderson who had fired the fatal round. Corporal Anderson’s extraordinary heroism and intrepidity, at the risk of his own life, above and beyond the call of duty, reflect great credit upon himself, the Jerome County Sheriff’s Office, and all Idaho law enforcement officers.