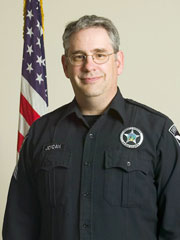 On Saturday, May 19, 2007, at approximately 11:22 p.m., Jason Hamilton arrived at the Latah County Sheriff’s Office, armed with two semi-automatic rifles, and opened fire. Sheriff’s Deputies were called in from home and were coordinating efforts and responses between one another and with other law enforcement departments. Among these were Sgt. Phil Gray, Sgt. Brannon Jordan, and Deputy Jay Waters. During the ensuing mayhem, Moscow Police Officer Lee Newbill was shot. Upon hearing that an officer was down, Sgt. Gray and Sgt. Jordan, along with Deputy Waters and Moscow Police Officer Jesse Applehans, coordinated a rescue team. Using Sgt. Gray’s personal vehicle, they drove to Officer Newbill’s location to rescue him, fully expecting to be engaged by the suspect’s gunfire. After placing Officer Newbill into the vehicle, Sgt. Jordan was inadvertently left behind when the rescue team fled the scene. He took up a position of cover, ready to engage the suspect. Sgt. Jordan was ambushed and wounded by the suspect, who was firing on him from a hidden location. After removing Officer Newbill from the area, Sgt. Gray, Deputy Waters, Officer Applehans, and Latah County Sheriff’s Deputy Ryan Sillers, even though, again, knowing they may be fired upon by the suspect, drove to Sgt. Jordan’s location to rescue him. Sergeant Jordan’s extraordinary heroism and intrepidity, at the risk of his own life, above and beyond the call of duty, reflect great credit upon himself, the Latah County Sheriff’s Office, and all Idaho law enforcement officers.