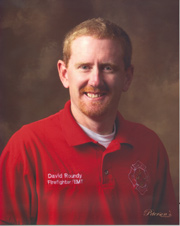 On Sunday evening, January 18, 2009, Oakley Volunteer Firefighter David Roundy was driving home after his shift as a Heyburn Police Officer. The fog was exceptionally dense. He came upon a large liquid-fill tanker truck, parked across both lanes of the highway. As he cautiously drove around the tanker, he found that a mid-size 4-door pickup truck was pinned under the tanker. He could see flames coming from under the mangled hood of the pickup. He immediately parked his vehicle and called in the incident to Cassia County dispatch. As he approached the pickup, he could see 20-year-old Tenessa Papp, semi-conscious, in the driver’s seat. The cab of the pickup was rapidly filling with smoke, and flames began to appear on the dashboard. The pickup doors were locked. Now joined by fellow Oakley Volunteer Firefighter David Korom, they attempted to break the driver’s side rear window with a tactical baton, without success. The smoke was increasing rapidly, and flames were coming through the firewall of the pickup. Unable to quickly find another tool, Firefighter Korom struck the corner of the window with his fist and managed to break it. Firefighter Roundy reached through the broken glass and unlocked the door behind the driver. He could hear Tenessa crying for help as he entered the vehicle and tried to lift her. Meanwhile, Firefighter Korom had found a pipe wrench and was able to break out the passenger side window. The additional outside air was now fueling the fire in the cab. Thick, black smoke made it almost impossible for the firefighters to see one another. Firefighter Korom cleared the glass from the window. Together, the two men lifted Tenessa up and out of the window and carried her to safety. Within seconds, the pickup cab flashed into a fiery inferno. Tenessa was transported to the hospital and released the next morning, having sustained only minor injuries. Firefighter David Roundy, through indomitable courage and disregard for his own safety and profound regard for the life of another human being, averted the death of Tenessa Papp. Firefighter Roundy’s extraordinary heroism and intrepidity, at the risk of his own life, above and beyond the call of duty, reflect great credit upon himself, the Oakley Volunteer Fire Department, and all Idaho Firefighters.