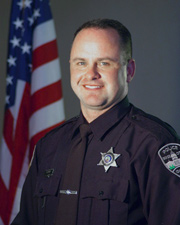 On August 5, 2008, Boise Police Officer Jason Rose responded to a Code Three call to “assist fire”. Officer Rose observed the fire, propelled by 50 mile per hour winds, racing toward the Oregon Trail Heights Subdivision. Officer Rose drove to the threatened subdivision, where he was joined by Boise Police Officer Chris Davis. Breathing thick, black, toxic smoke, Officers Davis and Rose ran from door to door, evacuating residents from their homes. After clearing one such home, Officer Rose was leaving the residence when he felt as if he “had been hit in the back with a sledgehammer.” He flew off the front porch and was thrown onto the ground as the house behind him exploded. With the realization he had almost been killed, Officer Rose picked himself up and pressed on through the flames and chaos. Forty foot walls of flame continued to force the officers to dive for cover. Propane tanks and water heaters exploded around them. Houses were burning as the officers entered home after home to make sure residents were safely evacuated. Despite the increasing danger, Officers Davis and Rose remained committed to evacuating the residents, ultimately causing the officers to become trapped in a cul-de-sac by a 100 foot wave of swirling flames. Officer Rose drove his patrol car through a barrier, allowing them to escape with their lives. Through indomitable courage, complete disregard for his own safety, and profound concern for the residents of the Oregon Trail Heights Subdivision, Officer Rose’s extraordinary heroism and resolute courage, fortitude, and endurance at grave danger to his own life, above and beyond the call of duty, are in the highest traditions of the Boise Police Department and of Idaho law enforcement and reflect great credit upon himself, the Boise Police Department, and all Idaho law enforcement officers.