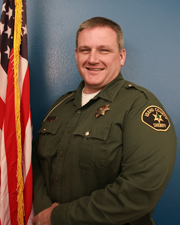 On the evening of July 10, 2009, Lieutenant Doug Ulmer and Deputy Carlos Martinez responded to a report of a young girl swept into the Clearwater River near Kooskia. Lieutenant Ulmer and Deputy Martinez searched the river and were able to spot two-year-old Kayla Ladd nearly a half mile down river from where she had been swept in. It quickly became apparent the rapid river current was taking her further and further downstream. Without any thought for his own safety, Lieutenant Ulmer removed his shoes and got into the water, swimming as fast as he could out to Kayla, who was approximately three-fourths of the way across the river. He reached her listless body, grabbed her and started swimming through the strong current to the opposite river bank, where Deputy Martinez pulled her out of the water. By now, they were far from the nearest road, so Lieutenant Ulmer had no choice but to walk up the bank through thick underbrush and timber, suffering injuries to his bare feet. Deputy Martinez carried Kayla along the railroad tracks to the road where Idaho County Deputy Randy Long was waiting to take both Martinez and Kayla to an ambulance. At the hospital, it became apparent just how dire the situation had really been — Kayla’s body temperature had gotten dangerously low to 88 degrees. With complete disregard for his own safety and extreme concern for a child, Lieutenant Ulmer’s selfless heroic actions, above and beyond the call of duty, reflect enormous credit upon himself, the Idaho County Sheriff’s Office, and all Idaho law enforcement officers.