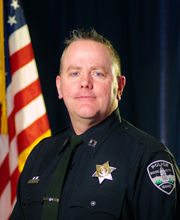 On June 24, 1996, at approximately 9:00 pm, Boise Police Officers Scott Mulcahy and Clay Christensen responded to a call regarding a suspect selling marijuana at the Denny’s restaurant in downtown Boise. When the officers approached, the suspect attempted to escape on his bicycle. Officer Mulcahy pushed the suspect off of his bicycle. The suspect then rolled to his back pointing a gun at the officers. An intense fight ensued as the officers tried to gain control of the gun. A gun battle followed, with the suspect escaping on foot and Officer Mulcahy chasing him. The suspect stopped and fired several shots at Officer Mulcahy. As the suspect fled, he ran in front of a car and waved his gun at the driver. He forced the young woman from her car and used the car to get away. While chasing the suspect, Officer Mulcahy attempted to contact dispatch, but his radio battery was dead. Officer Christensen picked up Officer Mulcahy in a police car and then pursued the suspect. Officers Mulcahy and Christensen located the stolen car crashed at 13th Street. The suspect had fled on foot, then chased and shot at a private business’s security guard. The suspect then turned his gun on the officers and fired. With complete disregard for his own safety and extreme concern for the lives of the citizens, Officer Mulcahy refused to retreat under continued fire. Officer Mulcahy’s extraordinary heroism and resolute courage, fortitude, and endurance at grave danger to his own life and that of the citizens of Boise, above and beyond the call of duty, are in the highest traditions of the Boise Police Department and Idaho law enforcement.