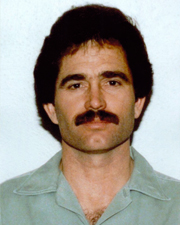 On January 11, 1989, at approximately 9:15 p.m., a violent home invasion, robbery and kidnapping took place in Sagel, Idaho, triggering a 22-hour manhunt by the Bonner County Sheriff’s Office. U.S. Forest Service Law Enforcement Officer Brent “Jake” Jacobson, deputized by the Bonner County Sheriff, volunteered to assist in the search, offering his familiarity with the area and expertise in tracking. On Thursday evening, at approximately 5:15 p.m. as light was quickly fading, Officer Jacobson remained determined to complete the search until the last minutes of daylight. He discovered a new set of footprints and determined to follow them, finding the suspects nearby in a small open area. With complete disregard for his own safety, and determination to arrest the two suspects, Officer Jacobson confronted the suspects and ordered them to surrender. The two men opened fire at Officer Jacobson, killing him in the ensuing gunfight. Officer Jacobson was the first law enforcement officer killed in the line of duty in the history of the U.S. Forest Service. Officer Jacobson’s extraordinary heroism and intrepidity, at the cost of his own life above and beyond the call of duty, are in the highest traditions of the Bonner County Sheriff’s Office and of Idaho law enforcement officers and reflect great credit upon himself.