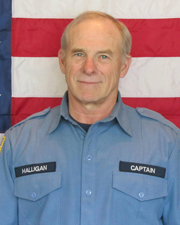 On August 28, 2011, at approximately 1:44 p.m., Coeur d’Alene Fire Department Captain and Paramedic Richard Halligan responded to an accident on Fernan Lake Road. A car had overturned into the lake and was completely submerged. Two young children were trapped in the vehicle. Captain Halligan and Coeur d’Alene Firefighter Donald Porter swam out to the vehicle and attempted to reach the children. They were unsuccessful due to poor visibility and the instability of the vehicle, which kept slipping deeper into the lake.

As a last resort, Firefighter Porter suggested use of the Self Contained Breathing Apparatus (which is not made for underwater use) which they put on before they entered the water again. Captain Halligan received the 5-year-old boy from Firefighter Porter, swam him to the surface and handed him to rescuers near the shore. Captain Halligan returned to the vehicle and helped bring the 1-year-old girl to the surface. The 1-year-old girl survived this terrible tragedy.

Captain Halligan’s extraordinary heroism and resolute courage, fortitude, and endurance, with grave danger to his own life above and beyond the call of duty, are in the highest traditions of the Coeur d’Alene Fire Department and Idaho fire service.