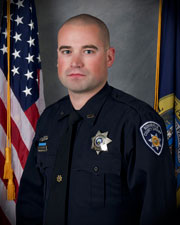 On June 17, 2011, Bonneville County Sheriff’s Deputy Anthony Glenn was assisting the Idaho State Police in apprehending a fleeing suspect. The suspect fled from a traffic stop and barricaded himself inside his home. Deputies Glenn and Chad Lenz, along with Officers Malin Reynolds and Bart Whiting of the Idaho Falls Police Department, entered the residence after breaching the door. Officer Reynolds chased the suspect into the kitchen where the suspect shot him at point-blank range. Deputies Glenn and Lenz, hearing the shots, ran to the kitchen where they saw Officer Reynolds lying on the floor. The suspect raised his pistol again, and the Deputies fired in defense of Officer Reynolds. The suspect then took his own life.

Deputy Glenn’s extraordinary heroism and resolute courage, fortitude, and endurance, with grave danger to his own life above and beyond the call of duty, are in the highest traditions of the Bonneville County Sheriff’s Office and Idaho law enforcement.