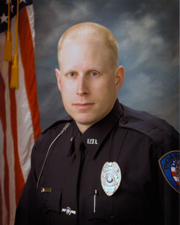 Officer Clark’s extraordinary heroism and intrepidity, at the cost of his sight in one eye, above and beyond the call of duty, are in the highest traditions of the Jerome Police Department and of Idaho law enforcement officers and reflect great credit upon himself.