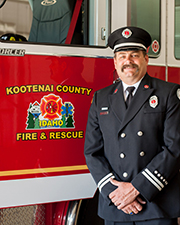 On April 13, 2015, at approximately 5:30 in the evening, Lieutenant John Ward discovered his neighbor’s home on fire in Rathdrum.  Off duty at the time, he immediately radioed for the fire department and then ran to assist.  He found almost all the residents of the home had made it to safety, but learned that a wheelchair-bound woman was still inside the home.  Lieutenant Ward knelt down to see beneath the black smoke that had filled the house nearly ceiling to floor.  He immediately saved two pets that were just inside the door, and saw the woman lying about 12-feet away.  He crawled into the house, under the hot smoke—without benefit of any of his usual protective firefighting gear—reached the woman and crawled back out of the house, pulling her to safety.

Through indomitable courage, complete disregard for his own safety, and profound concern for the victim, Lieutenant Ward showed great determination and thoroughness.  Lieutenant Ward’s extraordinary heroism, fortitude, and endurance, with danger to his own life above and beyond the call of duty, are in the highest traditions of the Kootenai County Fire & Rescue and Idaho fire service.