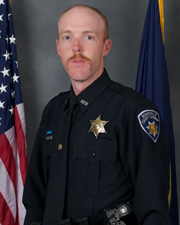 On September 28, 2015, at approximately 12:05 a.m. in Idaho Falls, emergency service personnel responded to an incident with a vehicle overturned in a canal.  The vehicle was almost completely submerged with a man trapped inside.  Patrol Sergeant Jared Hurt was first on the scene.  He immediately jumped into the canal, with water 3½ feet deep, and attempted to break a window, but was unable, due to the pressure from the water.  Sergeant Hurt then coordinated with other responders to try to pry the door open, but was once again stymied by the water.  Sergeant Hurt remained chest deep in the cold water and directed the stabilization of the vehicle with a tractor.  After several more attempts, they were finally able to gain access through a back door.  With the use of Sergeant Hurt’s knife, another responder was able to cut the victim out of the vehicle and Sergeant Hurt assisted in carrying the victim onto the bank of the canal.

Through indomitable courage, complete disregard for his own safety, and profound concern for the victim, Sergeant Hurt showed great determination and thoroughness.  Sergeant Hurt’s extraordinary heroism, fortitude, and endurance, with danger to his own life above and beyond the call of duty, are in the highest traditions of the Bonneville County Sheriff’s Office and Idaho law enforcement.