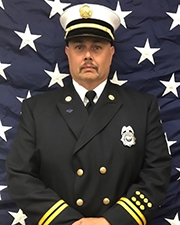 On June 14, 2016, the Blackfoot Fire Department was dispatched to a house where a car had driven through the structure, starting a fire and fully engulfing the house in flames. Fire Captain Dave Krumenacker was told of an elderly man trapped in the house. With no regard for his own safety, Captain Krumenacker led a two-man rescue team into the building. They quickly located the victim and removed him from the house. Once safely outside CPR was started but the victim succumbed to his injuries.

Through indomitable courage, complete disregard for his own safety, and profound concern for the safety of others, Captain Krumenacker showed great determination and thoroughness. Captain Krumenacker’s extraordinary heroism, fortitude, and endurance, with danger to his own life above and beyond the call of duty, are in the highest traditions of the Blackfoot Fire Department and Idaho fire service.