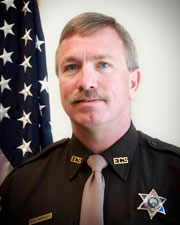 On August 2, 2016, at approximately 8:05 a.m. in Hammett, emergency service personnel responded to a report of a residential burglary and stolen vehicle.  Elmore County Chief Deputy Michael Barclay began to coordinate a search for the suspect, learned that the suspect was armed and called in Det. Sgt. Kyle Moore to assist in the search. A high speed chase ensued. The suspect abandoned the vehicle, and the chase continued on foot. The suspect pointed his gun at several motorists in an attempt to carjack a vehicle. After aggressively attempting to enter yet another vehicle by trying to smash the window with his gun, he then turned the gun on Chief Deputy Barclay and Det. Sgt. Moore. In order to protect their own lives and ensure the safety of the public, the deputies fired at the suspect, resulting in his death.

Through indomitable courage, complete disregard for his own safety, and profound concern for the safety of others, Chief Deputy Barclay showed great determination and thoroughness. Chief Deputy Barclay’s extraordinary heroism, fortitude, and endurance, with danger to his own life above and beyond the call of duty, are in the highest traditions of the Elmore County Sheriff’s Office and Idaho law enforcement.