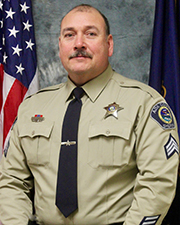 On the night of September 27, 2017, a team of Ada County Sheriff’s deputies responded to a 911 call in a rural Meridian neighborhood for a prowler and possible home invasion. When deputies arrived, they found that a violent and intoxicated man had broken into the residence. The officers could hear him threatening the lives of both the residents inside and the deputies outside. The suspect soon exited the residence and held what officers believed was a rifle. The suspect pointed the gun at several deputies, who then fired at and struck the suspect. The suspect then retreated into the house. Soon, deputies began to smell gasoline and could hear a female screaming as smoke billowed from the residence. The suspect’s condition and exact position inside the home were not clear. Despite the imminent threat, Sergeant Carlos De Leon, Jr. led a team of deputies in an attempt to enter the home and rescue the residents. Billowing smoke and extreme heat prevented the officers from entering the rear of the residence. Sergeant De Leon, along with several others, then began to break the home’s windows. The officers made several attempts to rescue the residents by having them come to the broken windows. As a result, two residents were pulled to safety.

Through indomitable courage, complete disregard for his own safety, and profound concern for the safety of others, Sergeant De Leon showed great determination and bravery. Sergeant De Leon’s extraordinary heroism and intrepidity, with danger to his own life above and beyond the call of duty, are in the highest traditions of the Ada County Sheriff’s Office and Idaho law enforcement.